You can subscribe to email updates on the right —- >

Apologies on the delay in getting this post out.  It requires constant vigilance to not get sucked into the day to day operations of being a leader and remember to take a step back and reflect.   It has been 90 days since I began my new role and like most leaders I have been following a “standard” 90 day plan approach.

Why is it that when something is standard we still have such a high failure rate of new leader introduction?  I remember being out to dinner once with a new manager on my team, Arvind.  We had been interns together and then later we were full time ‘high potential” individual contributors.  After two promotions and becoming a second level manager I made Arvind was my first hire as a front line manager.  Over dinner we were talking about careers and moving up in an organization he expressed something to the effect of:

“Bill, I am frustrated. All of the things you have done so far that lead to you being promoted were things I had thought of but just never did!  You did them!”

He was absolutely right.  As I pondered that statement I realized that all of the ideas or programs I implemented for my team and cross functionally were never my own.  My differentiator was making other’s ideas realized (or as I like to call it – Getting Sh*t Done).   As Sales Engineering leaders we know that “sales” is a part of our role and we sell constantly to our external customers.  Yet, we often forget to use those same skills internally when executing a 90 day plan.  Specifically:

During your first 30 days you will be under a lot of pressure to take action, make decisions, and address the multitude of things that have piled up while they were going through the hiring process for your role.  As you start the listening phase of your plan you will likely begin with your SEs.  After all, as our channel leader Phil says, “we hire people smarter than ourselves so that they can tell us what to do”.

When you ask a person what they like about something they will usually tell you one thing they like and then immediately tell you three things they don’t like.  The SEs will grouse to you about all of the ills they have had to suffer because of other groups and demand you go take action:

“We don’t have XYZ collateral from Product Marketing!”
“Our support team stinks, we are forced to handle all of our customer escalations!”
“Our services team stinks and I am forced to do all of the deployments!”
“Our compensation is all wrong, finance and ops are just lazy!”

After listening to your team it is easy to get riled up, be their champion, and go make things right.  If only those other teams did their jobs your team would be successful!

Some of the best advice I ever received was from Deric Shea, my first manager.  I was leading an engineering escalation team and I felt that our support team was being lazy and escalating customer issues to us too quickly just to make their own metrics look better.  One day I stormed into his office venting about the support team and I had my metrics to prove it!  After being patient and letting me wear myself out he asked me two simple questions:

Do you think people wake up in the morning and say ‘I want to suck at my job’?
Do you know how that team is measured and what they consider success?

Petr Olmer is one of the original employees at my last company and also a Czech citizen.  He relayed a story about a bridge outside his hometown and shared the below picture.  Imagine you are on one side and the other cross functional teams are on the other side.  You need those teams to walk across this bridge and come to you – yet they aren’t.  Why aren’t they? The path looks so clear, its obvious from your vantage point!

Yet what you don’t realize is that funding for this bridge was cut in WW2 and never completed.  The bridge does not extend all the way across. 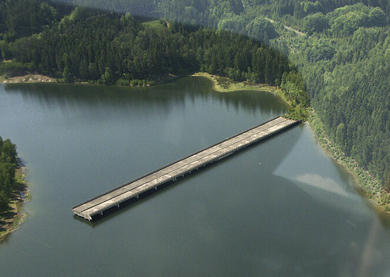 Part of listening isn’t just meeting with your own team members.  It should also include product management, post sales teams, the executive team, sales leaders, sales reps, channel, etc.  You should be genuine and “always assume positive intent” Indra Nooyi CEO PepsiCo).  Seek to understand how they are measured and what constraints they are under.  You never know if the bridge is out on their side if you don’t ask.

Now that you have a good understanding of both your team and your stake holders’ needs, constraints, and metrics you can start to create your action plan.  The typical thing to do is create a list of ‘asks’ that you require from other groups.  This can introduce two things:

Take this video for example.  It is painful to watch as you see the escalator break and everyone get frustrated and give up.  You just want to yell “just walk up the damn stairs!”

For what ever reason, we seem to forget the concept of give-get when operating internally.  If you were able to understand your cross functional team’s constraints and metrics in the listen phase then now is your opportunity to walk across that bridge, join up with them, and do something together.

For any ASK the you have of others:

By doing so you

Below is the primary output of my first 30 days.  It consolidates the feedback bucketed into key action areas, provided quotes and sentiment not only from the SE team but from cross functional teams, it states clearly what we will do, and then what we need from others.

Note that company confidential portions have been blurred. 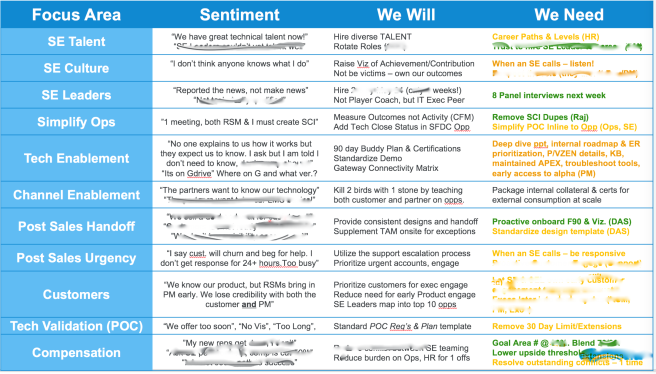 Ever hear of Expect only what you Inspect?  That holds true to team and cross functional initiatives as well.  People get busy and even though they may intend to do something next thing they know months have passed.  The SE Leader can play the role of score keeper (not judge and executioner) and provide a system and cadence for accountability.

The approach that has worked for me in the past is to assign a single SE or SE Leader to be an action owner for any ‘Ask’ or initiative.  It is their responsibility to work with the other stake holders across the company and ensure it happens.  This gives the SE something to mix up their day besides the daily grind of Demos and POCs.
As a cross functional team you then assign a single non-SE owner and agree on clear dates for deliverables.
Finally, the progress must be publicly visible and shared frequently.   I have used different tools in the past including weekly emails, shared spreadsheets, and Asana.  A good strategy is to find what action tracking tools your cross functional teams are already using and adopt their tool.  At my current company our development and product management teams use Jira for tracking bugs and features.  So why not do the same for the SE team? 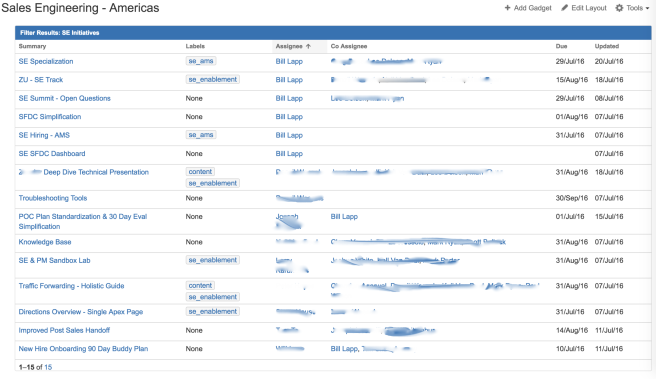 Thanks again for all of your support and interest.  I will caveat that I don’t know all the answers but hopefully the approach and lessons learned give you a valuable data point as you develop your own SE Leadership style.

For the next topic I will likely riff on Hiring and Interviewing.