Reminder: you can subscribe to updates on the right.  If you find these updates please share/repost.  One of the major sources of motivation to invest in writing is knowing that people find it interesting enough to read and then think “this guy is full of sh*t” or “hmm, that could be useful” or both —>

Every Monday morning I wake up about 4:30am, make coffee, and read Peter King’s MMQB before going to the gym.  This morning I came across a quote that made me stop and think not only once, but twice.

I realized how important it is to not only hire diverse talent and leaders but to listen to them and admit when you are wrong.  One of the things I call out in my ‘Welcome to our Team’ message to new leaders (chronicled here:  Setting Expectations) is a warning about how I will often play the role of:

Devil’s Advocate
In our one on one’s or meetings I often will play the role of Devil’s Advocate. This can be offsetting (annoying/frustrating) at first as it will seem that your new manager is questioning everything or arguing all your points. I do this so we can vet the ideas in a safe environment before moving on to external stakeholders. Other times it will be because I have the same view as you and I am exploring for pitfalls or weaknesses in the approach and hoping you can help. If the debate or questioning is too intense it is OK to say “timeout”! See the topic above – feedback. 😉

I realized I need to add in “and trust that you can and will change my mind.  You were hired because you are smart, resourceful, and make us better than we were yesterday – don’t ever stop doing that”.   When I think back on some of my most memorable moments in leadership it was when I deferred to a team member’s decision over my own:

Why was it so rewarding?  Because when I changed my mind and tried their ideas they ended up being better than my own idea.  Today I realized in crystal clear fashion – the way you build a team that is better than you is that you have a team that is strong enough to change your mind.

My second epiphany was when I thought of some of the greatest bosses I have ever had.

It truly hit me why people quit jobs because of their manager (“First Break all the Rules”).  A key trigger for me to leave past roles was when I was not strong enough to change my leader’s mind (or that they were not open to change).

Change Your Mind, Change Their Mind

What goes around come around.  We should remember that smart strong people have great ideas.  That is why you hired them.  Let them change your mind.  Remind them that they can change your mind.

And… never stop trying to change your leader’s mind.

As a final thought, I texted that quote to a previous team member who had more good advice: 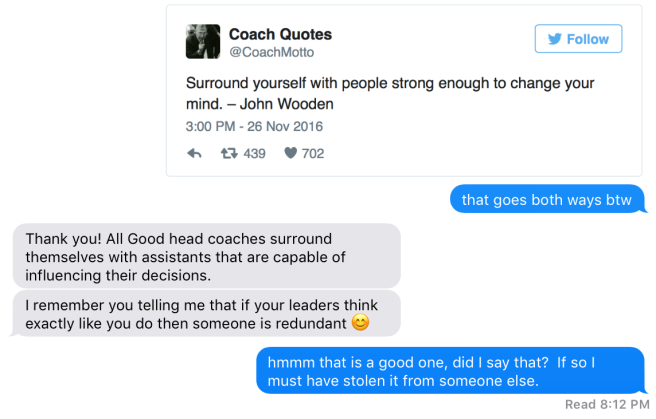 One thought on “Change your mind. Change their mind.”